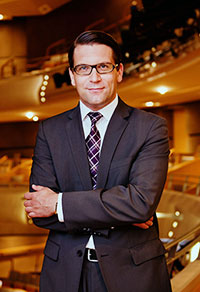 The Penn-Wharton Club and the INSEAD Alumni Association in Toronto are co-hosting a Speaker Series event with Alexander Neef, General Director of the Canadian Opera Company.

The Canadian Opera Company is the largest opera company in Canada and one of the largest producers of opera in North America. The company enjoys an international reputation for artistic excellence and creative innovation.

In this intimate and interactive Question and Answer session, Mr. Neef will discuss his strategy for growing the Canadian Opera Company (COC) since his appointment as General Director in 2008. During the initial years of his appointment, he kept the COC in the black, while boosting its standards and ambition while 70 percent of North American opera companies struggled in the difficult external environment. Since then, he has attracted the best talents who have never previously considered performing in Toronto and established the high reputation of the COC in the international stage. Neef’s story in leadership is exceptional given his ability to influence, manage and direct an opera company in Canada despite his lack of Canadian experience or formal business training.

Further detail and his biography can be found at: http://www.coc.ca/AboutTheCOC/AlexanderNeef/Bio.aspx

Business attire is recommended for this event.

Tickets can be purchased using the link below: